Marc Eckō's Getting Up: Contents Under Pressure : Walkthrough part 1 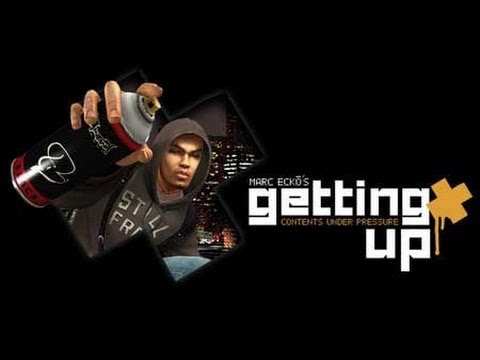 This is one of my old-favourite games,the story is awesome and it plays smooth,thou the camera controle is shit most of the times but it has a nice hip hop,soul music soundtrack that makes it a worth playing game.

The game focuses on an amateur graffiti artist known as Trane who uses graffiti and tagging as a way to protest against the corrupt Dystopic city of New Radius, in a future world where freedom of expression is suppressed by a tyrannical, Orwellian city government. The “Contents Under Pressure” title refers to the warning found on most aerosol spray paint cans.

The gameplay is set up like a non-linear fighting game; the story progresses in a linear fashion, without the player needing to complete side missions, as in Grand Theft Auto III, but a certain amount of freedom and open-endedness is available to the player as they complete “Tag Wars” in the first part of the game.
The story begins the New Radius Slums where Trane against the will of his grandmother and only relatively runs away from home to establish himself as an Graffiti artist. His first goal was to set himself as a notorious graffiti artist within the New Radius slums. His exploits reveals the state of New Radius, as a result of Sung’s attempts at Gentrification of the city to make it look prosperous. He has oppressed the lower class societies by eliminating the budget of liberal arts for more “prosperous” enterprises in the city, using the CCP to keep the slums and the reputation of the city’s seedy reputation through violence. Trane soon butts heads with the Vandals of New Radius led by Gabe who constantly paint over his works, realizing he needs to make his crew well known. He successfully tags the city monorail which allows him to show his graffiti around New Radius in the face of both the CCP and the VaNR and then defeating Gabe in a Graffiti battle which forces an alliance between both Crews.

22 thoughts on “Marc Eckō's Getting Up: Contents Under Pressure : Walkthrough part 1”